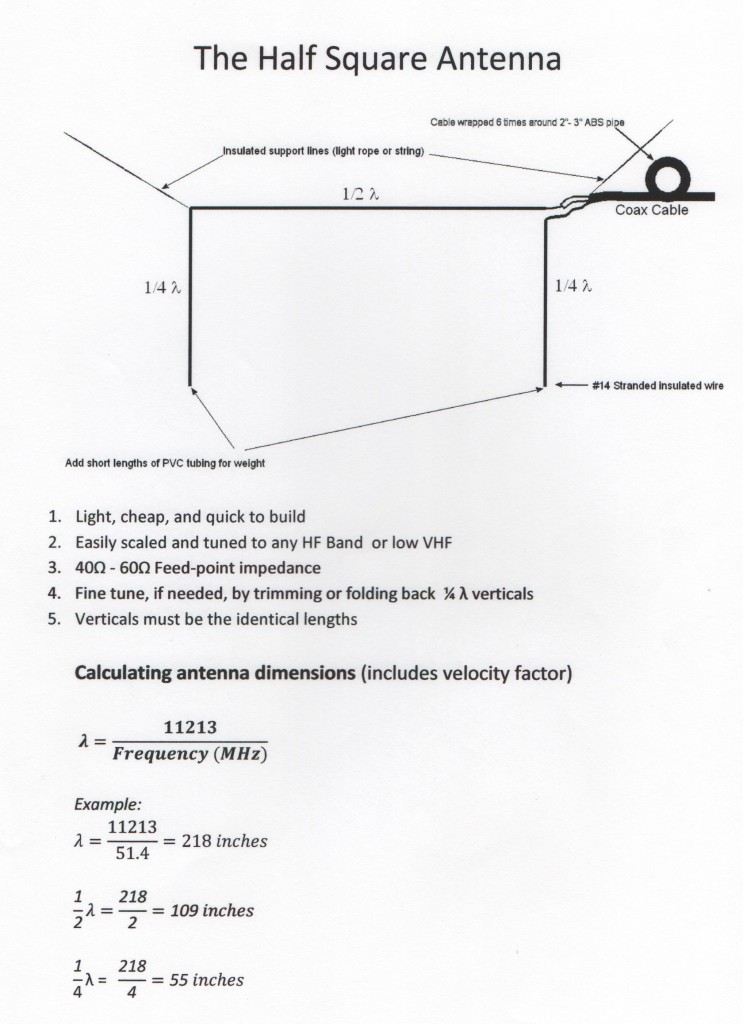 2. May be suspended from metal poles off the ends, but no vertical conductors placed between the

The half-square is a vertically polarized antenna as long as it is kept low and parallel to the earth surface. the horizontal phasing line radiation is cancelled and the two 1/4 wave tails are top-fed verticals in phase. It is surprisingly quiet on receive, easy to put up and tune, and gives efficient low angle DX radiation for a wire antenna at low height.  The pattern is broadside with nulls off the ends. Nulls are deeper with metal supports or trees in close proximity. A feed point choke is recommended to keep antenna currents off the coax….a lot more flexible in routing. The choke could be ferrite bead W2DU type 31 material about 6″ of beads stacked on the coax and taped.

When I built mine I used PVC pipe cap and plug for a center insulator, but a flat piece of lexan would do as well. I placed a 100 mh rf choke across the feed for a static drain. This works on 10-20 meters, I found a 47k ohm resistor works 6m and above since the rfc acts as an inductor  on higher frequencies. It is optional…may make it quieter. but I notice no rain static since I use the insulated wire and the ends of the antenna are pointed down instead of up.

The antenna can be fed as a random wire on other bands. If you want to cover 360 degrees mount two at right angles with separate feeds. If you raise it high….tails above 1/4 wavelength….it starts firing off the ends as well as broadside. The pattern also goes more upward, so gets noisier.